You're holding Me Down: Joe Meek Freakbeat 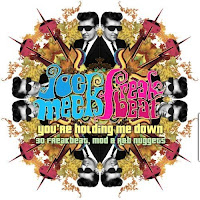 Bent. Paranoid to the extreme. Control freak. Closet Queen. Weirdo. Everything has been said over Joe Meek. All that is left of him now is his music. Although better know for his instrumental successes (Telstar, anyone?), he also produced some fine R&B-derived rock music, much of which prefigured the British Invasion sound by several years. Joe Meek, inventor of the Freakbeat?

Although touted as Britain's own Phil Spector, it is safe to say that Phil's character pales in comparison. Given the social and moral environment of early ‘60s Britain, it’s tempting to think that Joe Meek’s repressed sexuality and fragile mental state played the major part in shaping his creativity, but he built the first TV in his town, was an RAF radio engineer, a technician with the Midlands Electricity Board, and before branching out on his own was a BBC sound engineer. He did not last at the BBC because his methodology of altering recordings was completely at odds with tradition.

So, in his rooms above a leather goods store at 304 Holloway Road in London, Meek became Britain’s first independent record producer, pioneering special effects, tape reversal, direct imput of the bass guitar, close-mic’ing, and multi-tracking. It remains remarkable that he was able to emulate stereophonic sound on his 1959 recordings I Hear a New World, possibly the world’s first concept album.
Anyone who’s ever thought they sounded better singing in the bathroom, or felt that drumming on a table or door felt right should be able to relate to Joe Meek, who covered his lack of musical talent with his use of echo, reverb, compression, home made electronics, innovative sound sources, and ideas about the separation of instruments. Understanding of technology was one of his strengths, but instead of using equipment to emulate what already existed or make it cleaner, Meek was on a quest to harness his imagination
into sound.

This CD comes from the later part of his carrer, when, deprived of the income his hits had generated, tortured by the implications of his sexual orientation, he was desperately trying to invent a new sound. Sadly, just when the Beatles were expressing an interest in his work, Joe killed his landlady in a fit of paranoia-driven madness and then shot himself, on the anniversary of the death of his hero, Buddy Holly.

Can't wait to hear this...cool blog Fuzzy thanks for sharing

Thanks for these nuggets!

Finally got around to digesting this...really amazing !
Got a real nitty gritty feel about it 10/10 thanks again for sharing !