Played with true conviction: Band of Outsiders ' Act Of Faith 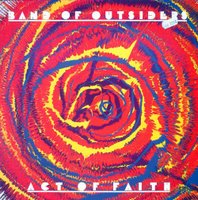 Bright sunny day here… spent the afternoon tinkering with my bikes, listening to this album, when it dawned on me I had uploaded it but not written the post… I have no chance of getting blogger's exhaustion!
As much as i really love their first album (see post below), much more muscle and sinew, this Act Of Faith album never fails to remind me of days just like today… dazed and sweet.
This is psychedelia for the modern times, with not a hint of mannierism and contrived sounds. This is a band at the summit of their powers, not afraid to wander into textures of sounds,going where nobody would have imagined. You guessed it: the whole band's output on vinyl is still as important to me as it was a good 15 years ago. I could retire on a desert island with just these 2 LPs and a bunch of their EPs (Diamanda, where are you? I'd love the Ep you proposed.)
From the lenghty intro of "Conviction", onto the dreaminess of "I wish I was your Kid" to the pummeling of "Fire in the Wall", and the twilight zone of "Clean Saint" and the wailing harmonica of "No Reflection", I wish they had kept on.
No hint of passé lyrics or "period-correct" sound, no this is a band at the summit of their power,moving boldly ahead when most others were statisfied by merely replaying the past. This is Chocoreve 2026 blog-fodder, people. Get it while you can, and remember where you got it from.

Quoted from Piero Scaruffi's "History Of Rock", probably one of the web's best source on music:
The Limit were one of the Power pop bands that entertained the punk public of CBGBs at the end of the 70's. The Limit evolved into Band of Outsiders, and in 1984 joined up with Certain General to record Far Away In America (Sourmash). Then with three good EPs released in 1985 and the album Everything Takes Forever (L'IAS) the Band of Outsiders introduced in an ever-increasing manner psychedelic elements, favoring atmosphere over melody. I Wish I was Your Kid is the classic of this period.

The leader, singer and guitarist, Marc Jeffrey took some to organize himself but then returned (in 1990) on the scene in the clothes of a solitary minstrel . The album Playtime (Conviction) is one of the most humble of the new generation of songwriters.

Does anyone know more about these guys or Marc Jeffrey?? Get in touch & leave a comment (with an email address, I intecept all comments before they are published, so it won't necessarly appear here) Diamanda, this also applies to you! I can't get in touch with you! A valid email addy is all I need!

Needless to say I am interested in any material recorded by the band, not posted on this blog.

This is a 256kb/s rip of a mint IAS copy of the album, lovingly restored by myself, it is all iTunes-ready, just download and enjoy. Still has the original price on the cover… a full 19.50 Swiss Francs, about 65% of todays cheap CDs, without even mentioning "underground" and "import" in the same sentence!

It is no reflection of all intentions… it is just a little later.
Posted by FuzzyWasabi at 5:14 PM

again another gem!
thank you fuzzywasabi!

Hi. I'm Marc Jeffrey. Glad you enjoy our old music. What do you want to know?

MJ said...
This comment has been removed by a blog administrator.
3:52 PM

I don't know if you are still interested but I released Marc Jeffrey's solo LP "Playtime" on my label Behemoth. If you would like a copy I can send you one, just let me know.

HEllo WoodShampoo,
Thank you! I am interested by anything/everything done by BOO and Marc Jeffrey… Just leave me another comment with your email… I moderate comments on this blog and won't show your address here ie I'll remove it from the comment.

Band of Outsiders is reforming for a special benefit gig:

Thanks for reminding me about Band of Outsiders. I worked in a record store in London in the 80s and used to endlessly play a compilation they were on. Think I'll try to track down that comp now.

Any news about A defector's strange disappearance?

A quick line to tell any of you out there, either members of the band willing to share memories or songs/demo or anybody else: Just GET IN TOUCH!

I need your email in a comment (emails don't get published).

I suspect there's still a dearth of BOO material floating about in the unknown… or your attic.

anyone interested in contacting the band can do so via email to bandofoutsiders@live.com or on facebook at www.facebook.com/bandofoutsiders