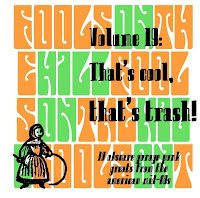 Time for the usual weekly update… We're back to Garage with a capital G! As usual, there is a twist with Fools on the Hill. We wanted a volume that would showcase the harder sounding trend, without sacrifying the Pop sound. Most of the Crypt comps were really too trashy for us, so we carefully selected 19 songs with a tough and edgy sound that still manage to add something to the game. To top it off, most of these songs and bands are fairly rare. Think of it: it's the one comp that took our own Sylvain FuzzyMental weeks to prepare. Hell with over 600 period vinyl comps to ruffle through, it could have taken him months! This is not a subgenre definying comp, rather a good mix of harder sounding (with a few surprises) pop-tinged garage songs. They could all have been re-recorded in the 80's by the Revival bands… why did they miss them? Heavy reliance on Nuggets/Boulder series? Lack of good taste? Too influenced by the "Crypt Trash" sound? or all the above? Enjoy them now!

1●The Charles ●Motorcycle
2●The Fountain of Youth ●Don’t blame me
3●Floyd Dakil Four ●Bad boy
4●The Plymouth Rockers ●Don’t say why
5●The Plagues ●I’ve been through it before
6●The Sleepers ●I want a love
7●The British North American Act ●Don’t run away
8●The Soulbenders ●I can’t believe in love
9●The Pictorian Skiffuls ●In awhile
10 ●The Fabulous Depression ●I can’t tell you
11 ●Fly by nites ●Found love
12 ●Soul Inc. ●Love me when I’m down
13 ●John English III ●I need you near
14 ●The Spiders ●Baby doll
15 ●The Marauders ●Since I met you
16 ●The Vibrasonics ●Send her to me
17 ●The Barbarians ●Hey little bird
18 ●The Rationals ●I’m feeling lost
19 ●The Effects ●I’ve been told (partial)
Posted by FuzzyWasabi at 10:46 AM

Thanks! I just found your blog. This is an irresistable download for Floyd Dakil alone.