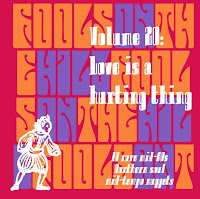 You might think we are stretching the subject a bit, but really we aren't. Northern Soul has its roots firmly in the 60's, as most of the records play at allnighters are obscure Tamla Motown 45s, released in limited numbers in the US. Some of them are the most expensive 45s in the world! A large proportion of northern soul's original audience came from within the mod movement, hence the inclusion on FOTH. In the late 1960s, some mods started to embrace freakbeat and psychedelic rock, but other mods - especially those in northern England - stuck to the original mod soundtrack of soul and blue beat. From the latter category, two strands emerged. Some mods transformed into what eventually became the skinheads, and others formed the basis of the northern soul scene. The northern soul movement is cited by many as being a significant step towards the creation of contemporary club culture and the development of the superstar DJ culture of the 2000s. As in modern club culture, northern soul DJs built up a following based on satisfying the crowd's desires for music that they could not hear anywhere else. The competitiveness between DJs to unearth 'in-demand' sounds led them to cover up the labels on their records, giving rise to the modern white label pressing. We were lucky when Sylvain compiled this, to be in contact with two avid Northern soul fans: DJ Soulful Chris and her husband, who opened to us their extensive 7" collection and were not short on advice. Thanks again to them (where are you now?). We will also eventually upload their Hypnotism tape collection, given permission, although a few volumes are missing.

Get your rare mid-tempos floaters, crossovers and beat ballads here.

1●H.B Barnum ●The record
2●Bobby Bland ●Shoes
3●Cressa Watson ●Sweet temptation
4●Roosevelt Grier ●In my tenement
5●Maxine Brown ●One step at a time
6●Bettie Swan ●You gave me love
7●Tommy Hunt ●Lover
8●Mitty Callier ●Pain
9●The Charmels ●Sea shells
10 ●J. Montgomert●Don’t turn your back on me
11 ●Tommy Hunt ●Just a little bit of your sweet lovin’
12 ●Roy Hamilton ●Let the music play
13 ●Garnet Himms ●It was easier to hurt her
14 ●Eartha Kitt ●There comes a time
15 ●D. Coleman&H. Rivera Orchestra ●My foolish heart
16 ●Big Maybelle ●If I ha you
17 ●The Shadows ●My love’s gone
18 ●Wade Flemons ●That other place
19 ●Lou Rawls ●Love is a hurting thing
Posted by FuzzyWasabi at 1:12 PM