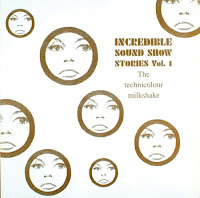 As promised, we're starting a new parralel series, with the re-upping of The Incredible Sound Show Stories. There are seventeen tracks by fifteen groups: standouts are "Action Painting" by the Ricketts, "I'm so Glad" (the Skip James song) by the Maze (two members of which would later be in Deep Purple--but this track sounds nothing like "Smoke on the Water"), and "Red and Green Talking Machine" by an unknown group. This is from the original vinyl pressing, full of 1960's acetates/private pressings/obscurities. It seems to a have a slight Deep Purple fixation: the Purple Barrier had to change their name to The Barrier because of DP and you'll find a track by The Maze (not the US bands) which featured Ian Paice and Rod Evans. The first track is an insane freakbeat instrumental by The Ricketts, which was worth buying the LP alone. Other track of note is "Devil" which sadly never made it past the acetate stage and "Silence of the morning" which has since then appeared on a number of comps.

Technicolour Milkshake here!
Posted by FuzzyWasabi at 11:24 AM

Sounds like a winner! I hope you're gonna keep up with the FOTH series tho cuz it was really getting interesting (at least to me)...I love garage rawk bust-ups as much as the next guy, but Vol 22 starts to go off in a really different direction... annnnyway....plz keep them coming!

Fools On The Hill will continue, but as it's quite time-consuming to make these comps, we will put up both Incredible Sound Show Stories and Psichodelicias the fill the gap between FOTH volumes.

If you have a request, don't hesitate to leave a comment!

Great collection. The first cut is a killer. In the description of the album you state that there are 22 tracks in the collection. When I download from the link provided I only get 17 tracks. Is this correct or should there be 22 tracks? Thanks for the all hard work making these available. I was very happy to see that you intend to continue the FOTH series.

17 tracks only as this is from the original Vinyl LP. The CD re-issue has 22, but the 5 extras are a bit of a filler.