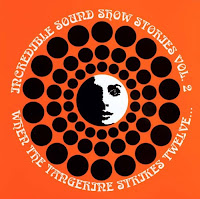 Second Volume of the ISSS series now up for grabs. This one has a definite Freakbeat/early Brit psychedelic tint to it. Again compiled from (very) hard to find acetates and master tapes, and ripped from the original Vinyl LP. Featuring rare John's Children tracks along with a BBC Interview… They sound all a bit full of themselves or were they out of their brains? There's also a heavy serving of the later incarnation of the Downliners Sect, when they discovered R&B was out and psych was in. All recorded as demo in a Medium's House with a band that was on the brink of exploding.

When the tangerine strikes twelve…get your fresh fruits & veggies here!

1- Daddy Rolling Stone - John's Children
The band attacks the song from every direction and they at least manage to play a verse and a chorus fromthe original version before smashing it up in true punk style. A good opener.

2- Every Minute of the Day - The Primitives
Great band already featured on ISSS 1 respected for their Pye 45 punker "You said". The track selected here shows their move into '66 mod style.

3- Little Piece of Leather - The Hipster Image
Slice of mod-influenced from Sheffield, they managed to hop on Jimmy Saville charity flexi with this Sue standard. Backflip is an organ instrumental (not featured here).

4- Shame Shame Shame - Unknown Band
Great '65 sound with a menacing rythm guitar from a band who strikes a close resemblance with the Kinks (Kontaversy period).

5- Eiderdown Clown - The Scots of St James
From Scotland indeed! Had their start on the Go label (subsidy of CBS) at the end of '66. This is their follow-up in 67, a classic psycher on the Spot label. Without much success, they went on to become the Hop Scotch and then Forever More. Graham Maitland then also appeared in pop psycher The Five Day Rain

6- White Caterpillar - The Downliners Sect
Proof that a good band can switch to different sound without being ridicule.

7- Shalom - Hell Preachers Inc.
You already had a taste of them on our FOTH 22 comp here. Proof of our good taste.

8- Boring Song - Charge
Early Floyd influence all over that slab of Art College psych from Derby. Double sided privately pressed 45. Recorded quietly in the college Library, believe it or not.

9- Spider - Downliners Sect
See White Caterpillar for description. When you start being obsessed with insects, it's time to lay off the drugs.

10- Perfumed Garden of Gulliver Smith (& Interview with John Helwett)
According to them, they were trying to expand the genre… the interview has them sounding like arty poofs, but the track is much better.

11- Never Mind - Elli
This single was released on the same day as the Fab Fours "Strawberry Fields Forever" ensuring instant obscurity. Elli will pop up on a number of other ISSS volumes… One of the UK's unknown national treasures.

13 - The Wind Out of Nowhere - Whichwhat
Track from a surviving master tape and an excellent find from Nottingham's late 60's pop/rock scene. The band stayed together long enough to record an album and 6 singles before splitting. Their late 70's reunion produced this fine lazy pop psych track.

14 - All Lead Back to You - The First Impression
One of the many late 60's London acts who fitted into the jigsaw of the underground circuit of the time. Also featured on the Saga label " Swingin' London" LP– a pretty ridiculous attempt at grasping the era ensured them well deserved obscurity.

17- Lord of the Rings - John's Children
Keith Grant uses the leftovers of the original Sect to record this strange attempt at psychedelia. Well, it HAS a very clear psych feel but you can still feel the good ol' R&B influence while declaiming verses about Tolkien's epic saga… what were they taking?
Posted by FuzzyWasabi at 9:21 AM

Thank You. I am enjoying this series. Keep 'em coming! The Primitives cut was great.