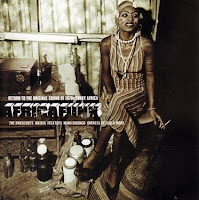 This fantastic introduction to the African Funk sound was what I'd originally had in mind as a post… then I thought a short refresher's course in American funk might be needed. All major artists are featured here from Manu Dibango to Fela and Tony Allen.
The songs run the whole gamut from James-Brown Carbon copies (Matata) to "real" Afro-funk (Fela et al). You can also spot Blaxploitation touches and soul influences all over them. The killer track is, in time-honored compilation-style, the first by the Rwenzori's: an absolute killer. To answer a frequent question, sadly there is NO other known track by these guys, only an EP was ever produced. This comp will be the start of a series of Afro-funk or Afro-psych in the next week. I was really surprised by the quality of what I found, so stay tuned for more weirdness from the oldest continent.

Once this series of posts will be over, I'll start a 20-plus volume series centered around Garage and Psych. This was intended as a beginner's guide to the genre but soon evolved into a encyclopedia. Should be interesting for both beginners and die-hard fans alike.
Shake your booty to the sound of Africa.
Posted by FuzzyWasabi at 10:03 AM

thanks a lot! this is an excellent compilation!