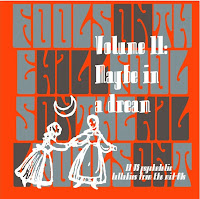 NEW FILE! A fine collection of early psychedelic American music, a lot of my faves are featured here. Unlike some of our other comps, most of these bands produced full albums which are at the least interesting, some of them being real classics (thinking of The Golden Dawn here, for example). It's interesting to see that psychedelia was devoid of gimmicks at the start, all the bands have a quite distinctive if mellow sound. Call it sonic exploration if like, there's none of the stereotyped "psych" sound here, no lengthy guitar heroics in sight, Jimmi Hendrix had yet to appear on the scene and radicalize this young movement. The Indian dream is gently creeping through some of the songs, with sometimes hints of acoustic blues, traditional folk and 30's ragtime. The provocation and protest attitude of late-60's (which I find quite boring personally) are also nowhere to be found. People were just enjoying new found mellow drugs and not yet into a bad acid trip… it's all mellow, man.
We've just completed another volume (22!) on which you'll hear again The Animated Egg… the whole volume is dedicated to psych exploitation or exploito psych, one of my favourite sub-genres. I wasn't too much in favour of including them here because of that, but they do fit in nicely. Just remember that this band was not a "real" band… but studio musicians trying to emulate the "now" sound. All the other bands were really earnestly trying their best and stretching the envelope.

Dig these psychedelic lullabies, download them here
Don't forget: comments are the lifeblood of blogs!
NEW FILE! It seems I don't quite get the hang of my iTunes… sorry. The zip now has all 19 songs. Last three were missing.

1● Animated Egg ●Sock it my way
2●The Freeborne ●Images
3●The Golden Dawn ●This way please
4●Those Guys ●Looking at you behind the glasses
5●West Coast Pop Art Experimental Band ●Eighteen is over the hill
6●Flat Earth Society ●Satori
7●Bo Grumpus ●Yesterday’s thoughts
8●Kaleidoscope ●Please
9●The Rising Storm●Frozen laughter
10 ●Faine Jade ●Piano interlude
11 ●Jade ●My Mary (more than ever)
12 ●Merrel Fankhauser & HMS Bounty ●A visit with Ashiya
13 ● First crew to the Moon ●We walk the rain
14 ●The Freeborne ●Land of Diana
15 ●Food ●Fountains of my mind
16 ●Gandalf ●Hang on to a dream
17 ●Love ●The castle
18 ●Strawberry Alarm Clock ●Pretty song (from "Psych-Out")
19 ●Sopwith Camel ●Maybe in a dream
Posted by FuzzyWasabi at 8:42 AM

Hey, that looks quite interesting. Vol. 9 with the McCartney's rip off is good fun too. Thanks for the shares, Philip

Thank you very much!

a very well chosen series of compilations, many thanks for your work!
and greetings from Germany