Fools On The Hill 13: A Trip through Unicorn's Forest - 18 fabulous acid folk and folky psychedelic greats from the late-60s /early 70s 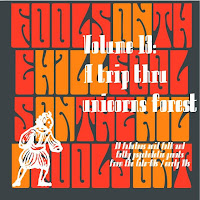 Don not confuse Acid-Folk (or Folk Psych) with Folk Punk… We've briefly touched the subject in FOTH Volume 4, as Acid-Folk lends itself naturally to the female voice. This volume is entirely devoted to the genre. After the renewed interested in all forms of folk, it was only a mattter of time untill some acid-dropping freaks decided they were bored by the straightness of folkies. How many reprise of "Scarborough Fair" can you stand? The Folk revival in Britain became rapidly very straight-laced, you were supposed to interpret these lovely Middle-Age songs note-by-note and very earnestly. It very clearly was The Incredible String Band, who also used sitar and semi-Indian singing, who helped fuse Psychedelia and Folk together. Most european countries would also sport bands playing this type of music, as their own folk scene was evolving into rigid reinterpretation of the past. Only Ireland, it seems, never produced acid-folk bands maybe because rediscovering and playing their folklore was essential to the very notion of Irishness. The weirdest group from that period without doubt was Comus, still a trademark for how far in expressions a “folk”-related group from that period could be. While most groups in England remained inspired by the traditional genre, many of the late 60s, 70s acid/psych and progfolk bands from Germany, France and Holland enjoyed a period of making creative experiments with longer improvisations and structures.
So what will you find here? A mix of acoustic bands often known for a peculiar, trance-like, and atmospheric sound, often drawing on musical improvisation and Asian influences. Their lyrics are often concerned with such subjects as the natural world, love and beauty and try to evoke a state of mind associated with the effects of psychedelic drugs. So, in other words, quiet acoustic music with "mystical" themes, often with acid flashbacks and psychedelic effects… enjoy.
NB: this is what I used to call "Hippie Shit" although I now know better… Hippie Shit is way more haphazard and is a whole complete style in itself. I'm not sure we will do a Volume on that, though. This is just to tell our 60's Punk readers to brace themselves! Keep an open ear… some of these songs might make you cringe but you might discover new ground with some others.

Superb. Really fantastic. Congratulation for this.

"Nijinsky hind", one of the greatest song ever!

No Irish Acid Folk bands? What about Dr Strangely Strange, Mellow Candle and Mushroom, then?

Not Oirish, just setting the record straight and perhaps point you in the direction of some overlooked music.