Fools On The Hill 9: McCartnisms on my Mynd - Fabulous McCartneys that Time Forgot 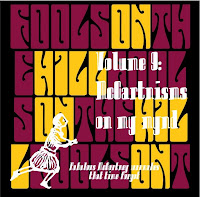 Here is one of FOTH best volumes (in my humble own opinion). Until a couple years ago, I couldn't stand listening to the Beatles, my sisters had them on heavy, near continuous rotation at home. On top of this anecdote revealing my age, it also explains my love of all things punk. Lennon, McCartney? Old hippies, all of them! Pauls' marvelous ease of composing only caught my ear when I listened to a Beach Boys bootleg where he visits Brian Wilson during the ill-fated Smile sessions. Paul quickly bangs up during 20 seconds a Beatle song they've recently been working on… absolute magic! It sounded instantly catchy, in total opposition to Brian's convoluted and painfull process of working.

Paul's gift was at least 30% of the Beatles' success and it spurred a legion of aspiring songwriters in the 60's and 70's. While a lot of them missed the mark by a mile, the few bands and artists featured here issued unknown effortless classics. Some of these songs sound so close to the real thing that it's unnerving. This was also their downfall: who would buy a McCartney clone when they could buy the real thing? Most of these LPs failed to chart significantly, despite the high hopes of labels (Emmit Rhodes was thought to be "the next big thing"). Some achieved critical success, only to disband faced with the lack of sales. 30 + years later, we were able to buy most of these LPs still shrinkwrapped… never played.

Listen to all these songs that should have been hit songs long ago,
get your comp here!

I'm impatient to hear this !! Thanks a lot !

thanx a lot for this comp, fuzzy. loved it!

thanks for ur work and have a nice xmas and a terrific next year :)

Hello,
I just discovered your blog and I really want to thank you for these compilations!

Just listening to this Macca-like compilation and there are so many of this ilk that could be compiled... ever heard about David Grahame?

The Leopards were very much on the Kinks side instead, IMHO. Their two albums are KINKS all over the place.

thanks for your work, again.

This raises the question of making a "kinky" Volume…
I have to agree, the Leopards sound very much like the Kinks, but I couldn't help myself! .-)