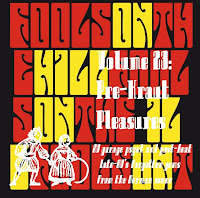 It took some time but the wait is finally over: here is the new FOTH comp! This relies heavily on the famed Prae-Kraut Pandemonium series of comp which has now stopped being published in vinyl. I suppose most of you have heard about Kraut Music and the bands who invented it: Can, Amon Düül etc. You certainly also heard about the infamous Beat scene and the Star-Club in Hamburg. But what happened in-between? I think the Pre-Kraut sound is heavily influenced by the political situation of the time. While the US was directly influenced by the end of the Vietnam war, Germany was recreating painfully its identity. The youth were trying to invent a new way of living but in a very explosive political moment. Extremism was rife, left-wing terrorism was on the brink of plunging the country into years of fear. Peace and love were not quite understood the same way as in the US. Alternative lifestyles such as creating communes and squatting were starting to happen. This is the sound of an angry and loose generation, shaking the sins of their fathers off their back and creating their own world.

Where else could a band have sung in 1968: "If you see a policeman, strike him down as fast as you can"? Quite far from Flower Power isn't it? This comp spans a wide range of styles but all songs are infused with an umistakable sound and energy. From tongue-in-cheek themes like modern surgery to class struggle reflections, from furious post-beat instrumentals to wacky english-sung psych songs (not to mention deeelicious german accents), the quality and variety of the songs is simply amazing. Another defining trait of Pre-Kraut is the will to invent something new and trying to sound different from the current British or US sound: Experimentation leads songs into some wild directions, be it quasi Stoogey punkers or etheral rave-ups. This experimentation will become the foundation of Kraut music… another subject.

You can find more about Pre_kraut at Spurensicherung , the blog home ofthe makers of the original Prae-Kraut comps. This is where they publish their new finds. Many thanks to them for all their hardwork and dedication.

This is, simply put, one of our best FOTH volume, get it here.
Your comments are always very welcomed… do not hesitate.

Track Listing:
1- Hab Keine Lust Heut' Aufzusteh'n -The Blizzards
I don't want to get up today - the perfect song for Mondays.

2- The Old Hangman Is Dead - The Kentuckys
A beat rehash of a traditional german folk song, the Dubliners wouldn't have recorded it that way.

3- Why Can't It Be Me - Ian & The Zodiacs
4- Leave This Lesbian World - Improved Sound Ltd.
A perfect example of a bent Pre-Kraut theme for a song.

6- I'm An Unskilled Worker - The Dukes
Typical of a them never touched by the US bands. I think the only song that comes close is
"(Would I Still Be) Her Big Man" by the Brigands on the Original Nuggets.

7- The Dentist - The Dukes
Yes. It's a song about going to the dentist… or avoiding to.

9- Kamera Song - The Inner Space & Rosy Rosy
What starts as a nice and gentle lullaby suddenly veers off towards anguish… and back.

11- What Do You Think - The Rainy Daze
I think this one popped up already on one FOTH volume,
it has the closest US sound of this selection, could be Texas or Louisiana folk punk.

12- Round The World - The Rebbels
An interesting ditty about rocketships with a few snotty musings thrown in.

13- Panic - The Slaves
Do you know what's the matter with me? It's a real panic!

14- All Right - The Wildcats
Teenage angst in the best tradition.

16- I'm So Lonely - Les Copains
Start as a completely tart song and then suddenly grabs Iggy by the throat.

19- Doing That Rhythm Thing - Novak's Kapelle
Again, nothing like what was done elsewhere in the world.
Trying the break the mould here.

21- I'm Your Guy - The Blizzards
Another splendid beat/pop nugget.

22- Heart Transplantation - The Dragons
After the dentist, the heart surgeon gets the treatment.

23- Wieder Auf Der Gass - The German Of The Bored
You will never listen to the Canned Heat version the same way.
I'm on the gas (pedal) again.

25- Tartarex - The Petards
This one veers towards prog, but the theme of the song alone is wirth the listen.

26- Can't You See - The Renegades
Another classic garage piece.

27- Give Your Love To Me - Les Copains
A desperate call for love from Les Copains.

28- The Things She Says - The Cherry Stones
This could have been Freakbeat if it were English.

29- Stop This War - The Seals
This one has its feet firmly in the period, both lirycally and musically.
Posted by FuzzyWasabi at 9:34 AM

Looks great -- thanks for the music!

Excellent job once again!
Thank you!

Yay! Another FOTH collection. I've been looking forward to this. All of these collections have been excellent. Thank you for all the hard work. I hope that there are many more to come. Thank you.

prae-kraut pandaemonium made it up to volume 15 on vinyl before we landed high, dry and broke with this labour love. BUT: vols. 16 - 20 are online-only comps, downloadable at: spurensicherung.blogspot.com

I think most of the tracks come from the vinyls with a few from the digital-only versions.

I tried to concentrate on songs that are the most revealing of the style: ie not straight beat and not straight Kraut work-outs. Only stuff that hints at that specific nordic/german sound.

Your comps were an eye opener for me and FOTH 23 is a condensed version of Prae-Kraut… see it as a hommage to your work!

It should also allow people to get a good taste of that genre.

Thanks for the hard work!

Thanks for the kind words. You're right. There must be something in the water here in Germany. Such a lot of stuff that couldn't have been recorded elsewhere. Compiling Prae-Kraut has become kind of an obsession during the last 20 years, though it wasn't meant to be more than a joke in the beginning. But I guess it has to be done now and by someone who was around and living in the 60s. It's great to see young people's love for the music, but they seem to believe that that decade was some kind of paradise, which it wasn't. Except for the music. All vinyl vols of prae-Kraut will be posted at: allmusic-wingsofdream.blogspot.com (aka:old melodies)the first nine are up already. But I have even weirder projects going... see the new comp on spurensicherung.blogspot.com :Mercy Sound UK 64-69, dealing with British Christian Punk-Beat of the 60s. At least as spooky as PKP. Yours, Lolly Pope.