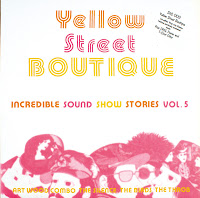 Time for instalment 5 of the Incredible Sound Show Stories, this time centered on the UK R&B scene circa 1964-65. Many gems à la Them and Yarbirds are to be discovered thanks to Dig The Fuzz Records and their world known Rubber Biscuit Studios. As stated on the original Lp, there has been NO digital remastering… and it does sound very original, let's say. Of particular note on this volume is The Silence, an early incarnation of John's Children and probably one of the few bands to really capture the essence of an era.

Enter the Yellow Street Boutique here.
Posted by FuzzyWasabi at 10:30 AM

Sorry to clog up your comments... We’re fellow bloggers, We’re Late For Class. Since 2007, we’ve posted 39 releases of FREE live improvisation and experimental/psychedelic music on our blog... just for the heck of it.

We’ve just released #40 Another Collection, a free 2-CD best of collection and we wanted to see what you thought (Rolling Stone doesn’t seem to be interested). A link in your blogroll would mean a lot to us, as that’s our only source of blog traffic.

You’re also welcomed to post #40 Another Collection for your readers, if you’d like. We’ve even made it easy by creating a page of codes to our nifty animated, future of online rock n roll cover, MP3 players (your readers can listen to it all on YOUR blog) and even a short write up about us you can use (or abuse or edit) if you don’t have the time to indulge in 2-CDs worth of stoner mayhem.

Let us know what you think. We’ll be happy to post links for you in our blogroll and, in the future, when our species comes to rule this planet, your name will be on the protected scrolls so that no harm will come to you.

Thanks in advance,
We’re Late For Class
http://werelateforclass.blogspot.com/

I am not going to be original this time, so all I am going to say that your blog rocks, sad that I don't have suck a writing skills