Fools On The Hill 8: Love Songs in the Night - Last gasps of the golden pop era (Pop Greats from the 70's) 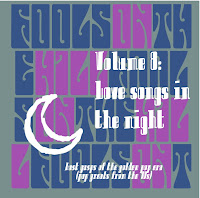 This is yet another compilation of "Pop" music with a twist. It all started on the pop 45 newsgroup when the compiler of the "Fading Yellow" series introduced us to this strain of music. As such it is not really a genre in itself, but more the last work of artists who started in the mid-60's and issued albums until 1974. Of course, their type of music was by then very unfashionable… the public was getting into progressive and heavy Rock music.
So Beatlesque pop ditties were not what was expected. As a consequence, most of these albums are difficult to find and expensive if you go for the original pressing. You'll find lots of private pressing due to label's frilosity about this type of music. Some artists like Billy Nicholls and Emitt Rhodes have now rightly achieved worldwide cult status, while others comitted the unthinkable (Rick Price went on to play with ELO). This is also the very start of the Power Pop bands, as demonstrated by The Raspberries. To sum it up: this is 60's influences pop played with a 70's sound, the last moments of brilliance for a certain breed of songwriters, before getting drowned out by Prog's flutes, Black Sabbath's clones and ultimately Punk.

Once again, superb comp !!! All your recent comps are on heavy rotation these days. The "Sunny Sunday Smiles", "Autumn Songbook" and "Goddesses" being my favourite. The choice of songs is great, diverse & top quality, and very well sequenced.
Congratulations and thanks !!!

Tanks,
as this is not quite my cup of tea, I was wondering if people would dig it.

Next volume is one of the best in the series ;-)… in my opinion!