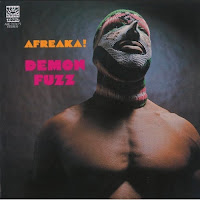 Well, here is the last Afro-something post. Next posts will be our own "Fools on the hill" encyclopedia for the new garage lover. But for now, this is the classic long lost British psychedelic funk album by Demon Fuzz. It is amongst the most bootlegged and sampled bands from the early 70s British underground.
In a just world, Demon Fuzz would have been very successful. Sadly, however, the only real success they enjoyed is the fact that many club DJs now use their samples frequently. Although the band played most of the British underground festivals in the early seventies, Demon Fuzz were simply too way-out to make a significant impact on the college crowd and as a result they broke up after 18 months on the scene. Released in 1970 the band’s only album, the extraordinary Afreaka!, demonstrates their excellence in playing psychedelic soul, dub-heavy funk, progressive rock, Afro-jazz and black acid rock.
They have a Santana mixed with the J.B.s mixed a little with Booker T and the MGS with lots and lots of Jazz sensibilities style that keeps you hooked; and the way the pace of the songs keep changing is also influential. However,putting the music aside; the lyrics are atrocious and are very unintentionally hilarious for example in the song 'Hymn to Mother Earth', which is an ode to our lovely planet, they say stuff like 'Im gonna make you mine!' and 'of all the planets you are the best' which is what you might expect from a 12 year old who has just smoked a blunt…
Freak out and get it here.
Posted by FuzzyWasabi at 9:54 AM

What ?? not one comment for this psychedelic masterpiece ? that's a shame, really ! ok, lyrics are foolish, as you say, but the music is outstanding & this is a legendary piece of fuzzed freakout.
Thanks a lot !!!